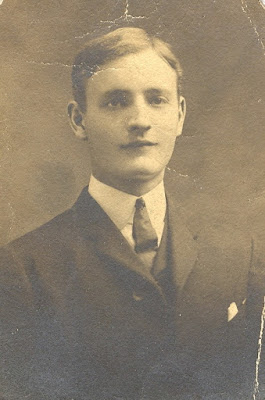 Photo: courtesy of the Byrd family

"The story of former Preston ward, Robert E. Byrd started long before his stay at the Preston School of Industry. In fact, to understand why he ended up there at all, one would need to know his back story.  Robert E. Byrd was born on January 8, 1882 to parents Joseph Edgar Byrd and Helen M. Wilder. His father, Joseph, was a Confederate Veteran from New Orleans, LA, while his mother Helen had been brought up the daughter of a farmer and former Union Soldier from Forestville, New York.
As certain as the tales of Romeo and Juliet, it was also obvious that the pair were in love. They even went so far as running away together against Helen’s father’s wishes, later eloping in Covington, Kentucky. Helen’s father did not approve of her marrying a “reb,” as Joseph was from the South while Helen’s family was from the North. After marrying his love, Joseph became a traveling salesman, who represented cotton brokers, publishers and dry goods suppliers to retail stores, while Helen became a seamstress to make ends meet. They traveled a lot during their first years of marriage, going from Louisville, KY, Evansville, IN, and Nashville TN.
In 1881, due to the tiresome life of being a traveling salesman with a family, Edgar Byrd chose to become an entrepreneur by opening a tavern in Florence, AL, hoping to make roots there. Unfortunately, this choice proved more harmful that good. In late December, Edgar Byrd became entangled in a fight with the former Mayor of Florence inside of his own tavern. The fight broke out and took to the street where it ended in a shootout, leaving the former Mayor dead. Although Edgar was indicted for murder, the charges were later dismissed due to “self defense.”  After being subjected to extreme stress, Helen gave birth to Robert two weeks later. Eventually, the family sold the bar and moved their family elsewhere.


Around 1884, while traveling for work, Robert’s father, all alone in his hotel room, died from malaria. Suddenly, Helen became the sole provider for her children which must have put a strain on her. She eventually moved back to her home county of Chautauqua County, NY. Once there, she bounced from boarding house to rented houses for many years, never being able to give her children the sense of stability she yearned for. After the death of her youngest son William, Robert seemed to have strayed down a path of delinquency. This was more than likely due to the lack of a father figure, unending hurt from the loss of his father and brother and also instability at home.
By the time Robert was 12 years old, he had been in trouble with the law. In 1894, he was sent to the Burnham Industrial School in Eastern New York State (now the Berkshire Farm School) where wayward boys were taught to farm. He received a rigorous education there, until his release on March 1, 1896. He then when home to Fredonia, NY, only to get arrested again three weeks later. By March 26, he was sentenced to the New York Industrial School near Rochester, N.Y.  For two years he served his time in a manufacturing trade school environment not so different from Preston. By January of 1898, he was paroled into his mother’s care, moving to Buffalo, N.Y.
As the Byrd family story goes, while Robert was working as a clerk in Buffalo, he became “restless.”  He then ran away to California at the young age of 17. Apparently, due to the stories of endless opportunities out west along with the romanticized folklore of the “get rich quick” life during the gold rush, he traveled to the Golden State with dreams of making it big. News accounts of that time period even mentioned that Robert went west “on a wheel,” meaning he rode his bicycle from New York all the way to California. By the fall of that same year, Robert had made it to Gardnerville, Nevada and then onto Reno. After finding himself in trouble once again, Robert sold his bicycle and bought a train ticket to San Francisco. 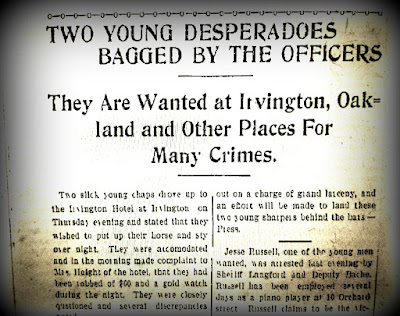 How Robert E. Byrd Ended Up In Preston (Ward # 416)
In November of 1899, Robert had made friends with a piano player, Jesse Russell. Eventually the two teamed up and decided to steal a horse and buggy rig in Oakland.  Driving the buggy to Irvington, they stopped to stay at the Irvington Hotel and skipped out on their bill. Leaving the horse and buggy behind, they left on foot onto San Jose down the railroad tracks, more than likely hitching a ride on the train as it rolled by. By the time Robert had made it to San Jose, he stole another horse, this time taking it from a livery. He had played the part of a potential buyer wanting take it for a trial ride with the full intention on purchasing it, however he never returned. He rode that horse all the way to Solano, CA.  He was then apprehended on November 16, 1899, being charged and tried for Grand Larceny in January of 1900 and sent to Preston for three years.

Within two months of being sent to Preston, Byrd had become an ‘escape artist’, walking out of Preston undetected. He did so by making a false key and opening his way out of the building. Within three days he was captured. Once again in July he attempted to escape only to be caught again. By December, it was reported that Byrd had broken into an officer’s room and stolen his revolver, concealing it for weeks while the officer never noticed his gun was gone. I don’t know about you, but one would think that as an officer at a boy's youth reformatory, how could you not know that your gun was missing for weeks?
That information from the officer makes me think the gun was actually planted in Byrd’s room to get him into trouble. How convenient that one random day, the staff just decided to raid his belongings and discovered the gun and a pack of red pepper. The pepper, they claimed, had been concealed for him to use at a later time in an escape to throw off his scent from any dogs used to chase him. Of course, because of this Byrd was punished severely and kept from being able to write his mother.
Superintendent Hirshberg wrote several letters to Byrd’s mother, claiming to be sincere at helping him and also making sure to reiterate that he “was not” keeping Byrd from writing his mother. Eventually the Superintendent grew tired of Byrd’s shenanigans and the ward was later deemed “wholly incorrigible and rebellious, not amendable to discipline and not fit for detention.” Hirshberg then shipped Byrd off to the Court in Santa Clara where he was sent to jail there for the remainder of his sentence.
What I find interesting is that after his ordeal at Preston, Byrd was never incarcerated again. In fact, he later went on to marry and have children and filed several patents with the Government for inventions he made. Byrd went on to work for and own several manufacturing companies including Pajaro Industries and R. E. Byrd Manufacturing in Erie, PA. Robert had done so well in his business, that in the 1920's his ads were seen published in various editions of Popular Mechanics magazine. During the 1930’s and the height of the Depression, Robert's manufacturing business was doing so well that he had over 150 employees working 3 shifts, 7 days per week.
Robert’s legacy was then passed down to his sons, grandsons and great-grandchildren, who still  continue to remain in the manufacturing industry as successful entrepreneurs to this day.  Sadly, Robert didn’t live a long life, dying at the age of 48 from congestive heart failure and kidney failure. One good thing that Robert took with him when he left Preston was a trade. Learning how to manufacture the key that he used to escape from Preston, was the catalyst that inspired him later in life to become a manufacturer.
Robert E. Byrd’s experience at Preston was one of infamy as far as his many escapes, but the real legacy he left behind was the value of hard work and skills he acquired at Preston that catapulted his life into one of great success for the rest of his life. "
--- Chapter 5. From the book. "Behind The Walls: A Historical Exposé of The Preston School of Industry" by Author, J'aime Rubio (Copyright 2012 - ISBN: 13: 978-1481075046)

UPDATE: Last year in 2017, I was contacted by a gentleman by the name of Kevin LaBeaume who discovered a small bird water whistle at an old antique shop that bore Robert Byrd's name on it. As it turns out it was one of many items manufactured by Robert's company the Robert E. Byrd Manufacturing Company of Erie, Pennsylvania back in 1920. I have since been able to get Mr. LaBeaume in contact with Robert's family and I am happy to see that Robert's legacy is still being appreciated even today.