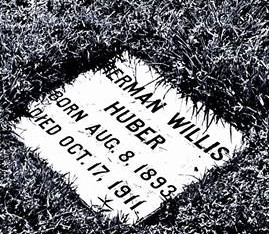 I recently received an email from one of my blog followers, Amanda Boling, in regards to Herman Huber's backstory. She had done some digging which revealed another tidbit into the life of young Mr. Huber, before he was sent to Preston on December 6, 1910.   Although she sent me some information I already had, she did point to a census record I hadn't seen, that shows Herman Huber was living with his mother Jennie, and her husband Amos Brothers (Herman's step-father) by 1910, in Alameda County. At that time Herman was 17 year old.

The other record she mentioned was another accounting for a person named Herman Huber, stationed at Yerba Buena Island in the same 1910 census, as an apprentice seaman. I had found that record before when I was researching Huber's life, but was never sure whether or not that was the right Herman Huber. After seeing the other census that Amanda pointed out, showing his mother and step-father were in fact living nearby, I think that it is safe to assume this could have been the right Herman Huber, too.

So why did I have information that Herman lived with his grandpa, William Ladd Willis in Sacramento? The story goes back to Herman's parents.  A strapping young man by the same name, Herman Huber, (born January 30,1873) at some point Herman met a young Jennie Willis (born August 4, 1873) and the two became sweethearts. By the time Herman had met Jennie, he was living with his mother, who was then a widow. A terrible accident killed his father on February 4, 1889.

Herman's father, who was also named Herman Huber, was thrown off his horse in Freeport, immediately causing death from a broken neck. He was a native of Switzerland and had been a very successful farmer in the area, leaving quite a large fortune behind. Jennie's father was William Ladd Willis, a native of New York. Willis had worked in the editorial department of the Record-Union in Sacramento for thirteen years and compiled the 'State Speller' publications for the State Board of Education. He also authored the book, The History of Sacramento.

The Sacramento Daily Union, dated May 25, 1890, gives us a peek of the social circles the two lovebirds ran with:

"On Friday evening, at the residence of his mother, six miles south of the city, on the Freeport road, a very pleasant surprise party was tendered to Herman L. Huber, who had just returned from Hopkins' Academy at Oakland for a short vacation. The evening was spent in games, music and singing. About midnight a splendid repast was served. The guests departed at a late hour, wishing Herman a pleasant vacation. Among those present were: Misses Emma E. Foster, Mae Blodgett, Jennie Willis, Lulu Rich, Lentie and Clara Brooke, Mrs. A. J. Huber, Mrs. H.W. Watkins and Carol Watkins of Oakland."--

By March 9, 1892, Jennie Willis and Herman Huber were married, as the Sacramento Daily Union also mentions:

"Herman L. Huber and Jennie L. Willis were yesterday united in marriage by Rev. Mr. Ottmann at the residence of E.B. Willis, 616 M Street. The bride was attended by her sister, Theodora Willis and Charles Huber, brother of the groom, was groomsman. There were present at the ceremony the relatives of the bride and groom and a few intimate friends only. The presents were very handsome and tasteful. The happy couple have gone to Monterey on their wedding trip.....The groom is a well-known and prosperous young farmer of Freeport Township, and the bride is a daughter of Mr. and Mrs. W.L. Willis of this city."---

By August 8, 1893, Herman Huber, Jr., was born to Jennie and Herman Huber, Sr. The marriage didn't last very long, and on July 9, 1896, the papers revealed that Jennie Huber was granted a divorce from Herman, with no mention of the grounds.

It appears that was more than likely around the time that Herman went to live with his grandfather, William Ladd Willis in Sacramento. I believe his mother also temporarily moved in with her parents, until she remarried, this time to Amos Brothers on February 24, 1900.  Jennie is accounted for on the 1900 census as living with Amos Brothers and his family in Berkeley, Alameda County. It is unclear how long Herman lived with his grandparents in Sacramento, although we know for sure by 1910, he was living with his mother and step-father in Alameda County.

I have found many accounts of a "Herman Huber," who was a well known marksman in California. A sharp shooter at the top of his game, this person was winning championships and making quite the name for himself. I cannot be certain but I believe that may have been Herman Sr., being that many of the competitions took place when little Herman would have been between 10 and 14, although I guess anything is possible. Maybe he took after his father and enjoyed the sport?

One event that I noticed occurred in 1909, could have very well been Herman Jr., given he was 16 years old by that time.

"Oakland, March 14.-- Herman Huber's name was first in the list of winning marksmen at the Shell Mound ranges today, the well known competitor winning several first prizes. With a score of 605 Huber won the first prize for the best three bullseye centers during the year in the competition of the Noddeutscher schuetzen club, and also garnered the awards for the largest number of bullseyes and the best 10 shot score. Huber's score in the 10 shot match was 2, 157 shooting in the first champion class."-- San Francisco Call, March 15, 1909

Could this have been our Herman, or even perhaps his father? It is hard to tell. But the one thing that stood out when I was reading the article was another name that appeared on the long list of his competitors that I recognized right away, J. French.

That is the same first initial and last name of the man who shot Herman Huber at Preston on October 17, 1911, killing him. Is this a coincidence? Or could this be the same person?

As of right now, I have no way to tell, but that won't stop me from continuing to research it further. Ernest Reed, the eyewitness who saw J. French shoot Huber stated that he did not shoot up in the air as French had claimed, but intentionally shot Huber.  Could he have wanted to shoot Huber for some reason that was never brought up? Could there have been more to the story than just an attempted escape gone wrong? Did these two people know one another beyond the boundaries of Preston?

We still do not know why Herman Huber was sent to Preston. The newspapers claimed that because of his "waywardness" and hanging around a crowd of people his family didn't approve of is what sent him there, even the Preston ledgers at the State Archives in Sacramento only labeled his entry as "Delinquent."

Herman's father went on to move to Southern California, where he eventually passed away in 1954. He was buried at Forest Lawn Memorial Park in Los Angeles. Jennie Brothers, Herman's mother died in 1950, and is buried at Mountain View Cemetery. Just yesterday I finally found their memorials on Findagrave and linked them to their son's memorial. Although they are all buried many hundreds of miles from one another, they now can be joined together via "Find-a-Grave."

Let's keep remembering Herman Huber, and hopefully one day, we may find more evidence that can explain the real motive behind his death in 1911.

To learn the story of Herman Huber's death at the Preston School of Industry, please click on the link below:

Thank you Amanda Boling for the 1910 Census information!

Posted by J'aime Rubio, Author at 5:57 PM No comments: