The Boys Buried In The Cemetery 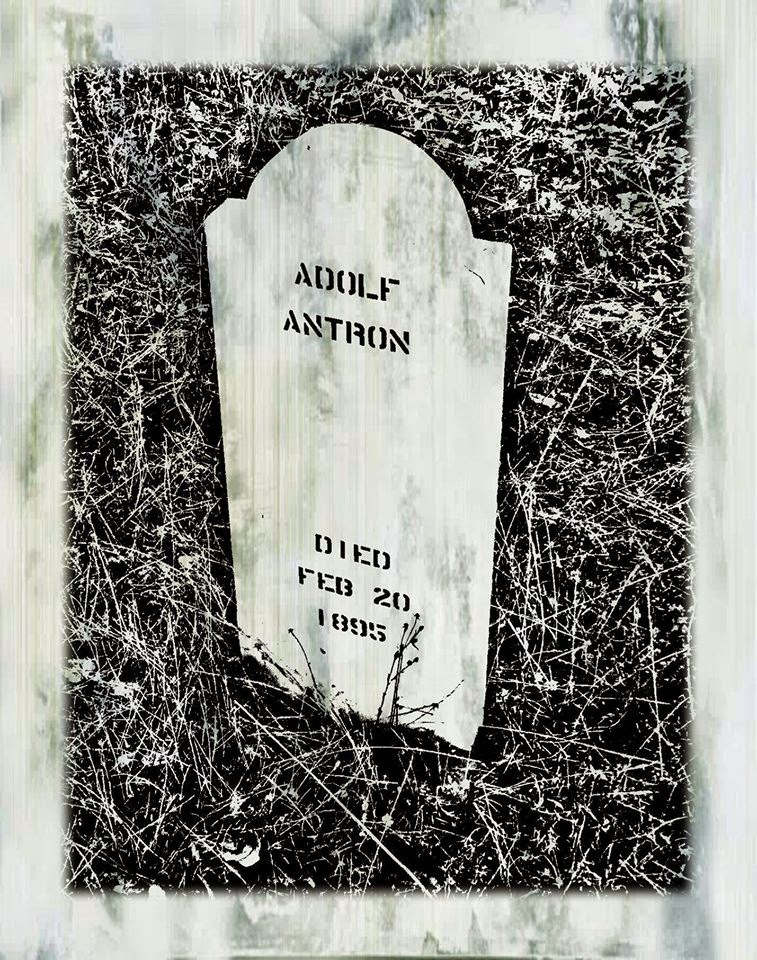 Here are some facts about the boys who are buried out behind the Preston School of Industry. The information you find here is either from my book, "Behind The Walls"- or added information that has come to light during my continued research and investigating since the book was published. Some of the newer information that is listed here, I had previously posted on my "Behind The Walls" Facebook Page within the last year or so. Although I do not go into full detail in this post on all the deaths of the boys, I will more than likely dedicate more blogs to each of the boys in the future. Below you will find a list of all the boys buried at the cemetery, along with their dates of birth and death.

THE FIRST TWO DEATHS AT PRESTON- WHAT REALLY HAPPENED?

According to the Biennial Report dated August 1, 1896, Preston School of Industry’s Physician A.L. Adams report states that given the conditions the boys were in when committed to the school, they were not surprised by the high rate of “hospital inmates” as he put it. In fact, he speaks of the entire facility have been exposed to some of the worst illnesses including, incipient phthisis, typhoid fever, scarlet fever, epidemic influenza, tonsillitis, malarial fever and pneumonia as well is chronic illnesses such as epilepsy, chorea and the regular fractures, bruises, abscesses and contusions.

What I found quite interesting is the fact he speaks of having only two deaths since the school opened and that no deaths occurred that year (1896), thus the two deaths occurred during 1895. He goes on to state that the death rate was remarkably low due to the fact most of the boys were in poor health when arriving at Preston despite their lifestyles, habits and “general dissipation”.


He goes on to state, “One death was due to an accidental burn, resulting in intestinal ulceration, and one was caused by pulmonary congestion---was sick when he entered the School. Each was accorded decent interment on the grounds of the Institution, and their resting-places were properly marked; so that, if in the future their parents or friends so desire, they may be moved to other places for burial.”


According to records that have been out there for many years, in fact even the information I found for my book, the two boys buried in the cemetery behind Preston during 1895 were Adolf Antron and Grant Walker. It was reported that Adolf Antron, who died on February 20, 1895, died from pulmonary edema which corroborates the doctor’s report. However, Grant Walker died on June 17, 1895 allegedly from typhoid fever….but the report says the other ward died from an “accidental burn, resulting in intestinal ulceration.” I find this very interesting and wonder what really happened and what other information that has been reported or recorded is in fact, incorrect?

Nicholas Hamilton was received at The Preston School of Industry in 1895, and he died on May 17, 1898. The story behind Nicholas Hamilton's death is quite murky. You see, the Biennial Report states that he died from “pulmonary tuberculosis” and that he was kept “isolated” from all the boys. It also says they used “strict antiseptic precautions” to avoid contamination with the other wards, but other aspects to the story make me question the validity of this. If he was so contagious and so ill, why is it that only 6 months earlier he was well enough to attempt to escape? And why did Superintendent O'Brien risk his own health by having such close physical contact with him?

A sworn affidavit by Preston's acting physician E. E. Endicott stated:
"A youth by the name of Nick Hamilton, in an endeavor to escape, had sustained a sprained knee. When called in to attend the injured lad I found him lying in the hospital suffering great pain. I examined the knee and found it badly swollen and inflamed. Dr. A.L. Adams of Ione had also examined him and confirmed diagnosis. Treatment was at once instituted with a view to relieving the suffering boy, when the Superintendent appeared and desired to examine the injury.

He rudely grasped the boy’s limb, and to our astonishment began vigorously flexing, extending and rotating the limb, heedless of the yells of pain emanating from the tortured boy, his only reply being “LIE STILL, I’M BOSS HERE!!”-

If he was so ill, wouldn't it have been mentioned in the affidavit? It might have even helped the case against O'Brien, being that the Superintendent was brutalizing a sick, frail boy. But no, it was never mentioned. That leads me to believe he may not have been ill at all, and that the "confinement" he was sent to, was because the incident with the ward brought shame and scandal on O'Brien and threatened his reputation. Nicholas Hamilton died only 6 months after the scandal broke in the papers....a coincidence? We are left only to speculate now. 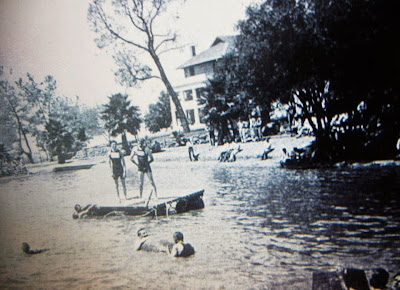 Here is a photo of the swimming hole at the Preston School of Industry. One of the stories I talk about in my book, "Behind The Walls," was the drowning of Tehema Vann on the evening of June 6, 1914. According to official reports, the boys from Company I went down to the pond to swim about twenty minutes after finishing their supper. Captain Enright told the boys if they weren't good swimmers, to stay at the shallow end of the pond. Tehama claimed that he could swim "dog fashion" just before he dove in head first. The boys who witnessed the incident said that he came up once for air and raised his hands and arms in a panic just before he went under and never surfaced again. Two boys, Robert Rains and Albert Rubidoux tried to dive in after him, to no avail. It wasn't until the next morning that they were able to retrieve his lifeless body that had sunk to the bottom of the pond. Tehama is among the boys buried in the Preston School of Industry Cemetery behind the Administration Building.

The Death of Sam Goins

One story you may have heard while looking into the Preston School history, is the story of Sam Goins. Goins was an African American inmate who was shot by John Kelly or J.E. Kelley (also seen spelled as Kelly). According to the Amador Ledger, dated April, 19, 1919 entitled “Guard Kills P.S.I. Escape” states:

“Samuel Goins , colored, an inmate of the Preston School was fatally shot by guard J.E. Kelley last Saturday. Goins escaped from the school the day before and the guards found him at the Thornton Ranch. He threatened to kill anyone who attempted to take him. Kelly , failing to halt him by command, fired to hit him in the leg, but just as he pressed the trigger, Goins stooped to go under a wire fence and the bullet struck him in the back.
He lived several hours, and before dying, exonerated the guard, declaring he alone was to blame for the affair. Kelly was acquitted by the coroner’s inquest held Tuesday. The funeral was held in Ione, Wednesday. Goins was a native of North Carolina, aged 20 years. He went to the school from Alameda County for burglary."---

Samuel Goins was just two months shy of being released when he attempted his third escape. It was reported in the newspapers that ward Joe Lopez, who was with Goins when he died, testified on J.E. Kelly’s behalf at the inquest. However, the inquest records state that his name was actually Joe Acosta. Acosta claimed that Goins, “tripped going over the fence and he got shot after he tripped over.” 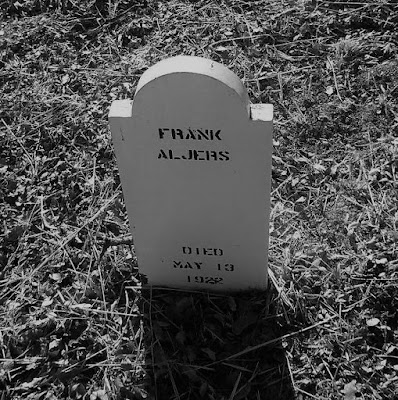 It has been somewhat of a mystery as to how Frank Aljers (aka Alves), a ward at the Preston School of Industry, died from an abscess of the brain; caused by a motorcycle accident in 1922. In "Behind The Walls" I mentioned his death briefly in Chapter 10, as he is one of the 18 boys buried behind the Castle in the Preston Cemetery. After speaking to historian John Lafferty on this subject a while back, he informed me that he uncovered that the accident that caused Frank's injuries happened on March 28, 1922, in his hometown of Fruitville, California. He arrived to Preston on May 6, 1922 in poor condition and went straight to the school's hospital, where he died a week later. It is unknown what he was sent to Preston for and why they would admit him when his health was in such a bad state, but now we know more of the circumstances that led to his death.


To learn more about these boys as well as the rest of the Preston School of Industry's history, please keep reading this blog, check out my Facebook page and get a copy of my book, "Behind The Walls" today!

The Boys Buried At Preston's Cemetery

(© Copyright 2012-2015, J’aime Rubio, Originally published either on blog “Dreaming Casually” by J’aime Rubio, or in the book “Behind The Walls- A Historical Exposé of The PrestonSchool of Industry” by author, J’aime Rubio.)

All rights reserved. No part of this blog may be reproduced, stored in a retrieval system, or transmitted in any form or by any means without prior written permission by the author/publisher, J’aime Rubio.